Recently an executive of a large multinational corporation shared his thoughts with us about the corrupt operating environment in Latin America.  He was amazed at how there can be such differences in the level and perception of corruption among countries in the same region.  He witnessed how his own company had two very different experiences in two separate countries where managers, who have since been relieved of their duties, were operating similar bribe schemes.

When phony invoices were discovered in Country A, the company’s manager barely escaped with his life and is likely still serving time in a not so hospitable Latina American prison.  Shockingly, when the same scheme was uncovered in Country B, the foreign government and local employees were completely disinterested in prosecuting the scam.  In fact, they gave the manager a farewell party and provided a private jet flight to his destination of choice after he was fired by the company.

The executive speaking with us was pretty sure that whoever replaced his corrupt manager in Country A would likely not make the same mistakes so long as the consequences were known.  But how would he prevent future acts of corruption by managers when they are assigned to countries known to allow or encourage bribery like Country B?

Obviously, the company’s mandatory “check-the-box” compliance training did not work, and once a new manager “goes native” he will likely be exposed to the same pressures his predecessor experienced in Country B.  He knew that he would need to take the issue seriously and would likely need to audit each overseas office one at a time.

The first task for a company of its size was to prioritize their anti-corruption efforts to focus upon countries with the greatest risk first.  Clearly, they needed to identify countries more like the second country and less like the first in which they operate.  So the hunt began for some common market level indicators of an environment ripe for corruption.

The most obvious difference between the operating environments of the two countries was the level of competition in each.  Specifically, the level of foreign competition was significantly different.  To test whether there is a correlation between corruption and foreign competition, Table 1 below was created by using Transparency International’s Corruption Perception Index (CPI) to rank all of the countries in the Western Hemisphere by their perceived level of corruption and cross reference each country with their top three import partners.  The number in parentheses next to the foreign importer name is the Bribe Payer Index (BPI) score that measures the likelihood for importing firms from that country to pay bribes on a scale of 1 to 10 (1 is most likely to pay and 10 is least likely to pay). 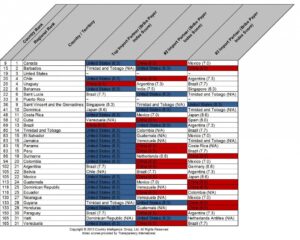 Aside from the competitive landscape that shapes the business culture in a specific country, it is also commonly known that some economic sectors are also more prone to corruption than others. Some sectors are relatively free from corruption where others are plagued by corrupt practices. Table 2 below cross-references the same list of Western Hemisphere countries with the BPI for firms in different economic sectors. Using the table, a company can plot their general exposure to corruption by identifying where the country in which they operate intersects with the economic sectors in which they participate. The top-left corner of the table will experience the least amount of exposure to corruption, while the bottom-right corner will experience the greatest amount of exposure to corruption. For example, a company in the Agriculture industry in Canada could expect to operate with near absolute freedom from corruption whereas a company operating in Venezuela’s Public Works and Construction Sector should expect with near certainty they will be pressured to pay bribes.

Table 2: Corruption Risk by Country and Economic Sector for the Western Hemisphere 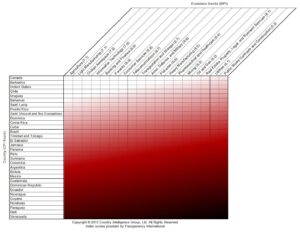 Exposure to corruption increases dramatically when operating in developing countries like those in Latin America, and companies of all sizes will feel the pressure if they stay in the international realm for an extended period.  For companies already doing business abroad, the above tables can be used as a tool to help determine their exposure to corruption and to help determine in which markets to focus their anti-corruption initiatives.  For companies looking to break into a new geographic market or wishing to diversify into a new sector, the tables provide a heuristic measure that can help prioritize corruption risk among other risk factors when entering a new market.

What Our Clients Say

"You are doing great things to meaningfully integrated WPS into SC curriculum at all levels."

— Department of Defense Gender Advisor
"The WPS training was well received – not least because your WPS experts had such a great presentation. We’ll also coordinate to get your Expert into our course earlier and with more time!"

— Department of Defense Executive Education Manager
"WPS is incredibly important, and we’re so glad to have it as part of the curriculum. The amount of thought, organization, expertise, and teamwork that you all brought was truly appreciated. What a valuable module that was for the students!"
— DoD Training and Education Course Manager
"The training was so well done and you all made such a fabulous team!"
— DoD Training and Education Course Manager
"The Government is now able to track and analyze the Security Cooperation certification status of all of the Military Departments' and other stakeholders' which was not possible to track prior to CountryIntel’s efforts."
View More